We don’t really need a permit to watch birds around a biodiversity park, the decision we took with a pack of birdwatchers to field the birds around Satpura reserve edges was rewarding! I drove past most of the Pipits and Larks, on a request from guests, not to break the momentum in the early hours and rather give them late morning as they would still be around. I overshot something what appeared to be a Pipit; with a somewhat buffish mantle but roundish overall. Angie said, hey wait what is that Pipit- I reversed the 20 meter gain and guess what! It turned out to be our first Desert Wheatear for the season!!

We had a fantastic look at this bird, that flitted a few meters in a tilled field, the black tail without any white was one of the key identification but the sandy overall and the white throat and chin all confirmed the identity. The tail was a good give away and a chirpy soft call helped lock its ID!

Winter has brought the most heat enduring bird so close to Forsyth Lodge!

Satpura is undoubtedly one of the most beautiful landscapes where wild cats, the largest to the smallest in the world, are found. The challenge for Tigers is the landscape itself, the hilly terrain with steep walls and the reservoir that has engulfed its feeding streams where they would often patrol.

Unlike popular safari parks where seeing Tigers is frequent, Satpura is blessed with its infrequency. You read it right! It is blessed. With low tourist influx and low vehicular traffic, the opportunity to ‘experience’ a Tiger is the highlight. The cherry on the cake is when a Tiger is sighted against the challenges the landscape poses for us to track them down in a safari vehicle.

Having said that, the frequency of Tiger sightings has increased significantly in the past two years, thanks to the yesteryear’s committed Forest officers who have successfully relocated many villages and empowered them post relocation to add over 7000 hectares of space for the wildlife. 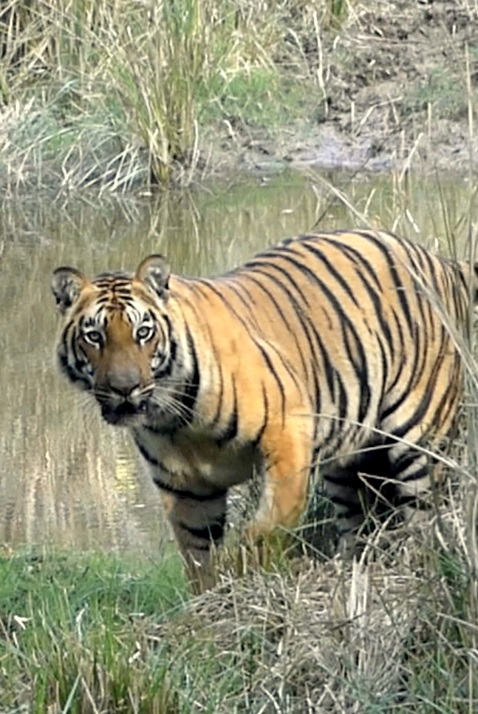 We have been witnessing a breeding tigress in these inviolate spaces and occupying historic territories. A tigress had given birth to a few cubs around the tourism zone where Forsyth Lodge operates around 22-24 months ago. We started to watch the two male cubs graduating into their boyhood, they with their mother often hunted close to where Wild Dogs were denning and raising 4 pups. As they began to break cover and build confidence around Safari vehicles, we observed some of rare social behaviour of these big cats. The area that was seldom occupied by Tigers started seeing new signs; the co-predators adapted their spaces and worked towards temporal changes. The Forest started to behave differently; our guests have this chance to experience a Tiger. They are now becoming a part of this story as they learnt during their explorations by jeep, canoe or on foot.

It was 16th of March 2020, our guests had to abruptly end their story and we all have been through the sudden lull in our existence here. But the season opened in October with a new hope, the so called new ‘norm’. Guests risked to experience their favourite holidays once again. It was a first for all of us, distancing from the personalised experience we offer. The initial guests came with a suspicion post lockdown and the feeling was mutual. Our first safaris nearly after 6 months, smelling of the 70% alcohol and scents of different brands of sanitizers, would have helped in a lot of catching up but all we had was a slit between the caps, masks and gloves to experience it all again. It felt contained, peering at places we belonged from a rat-hole. 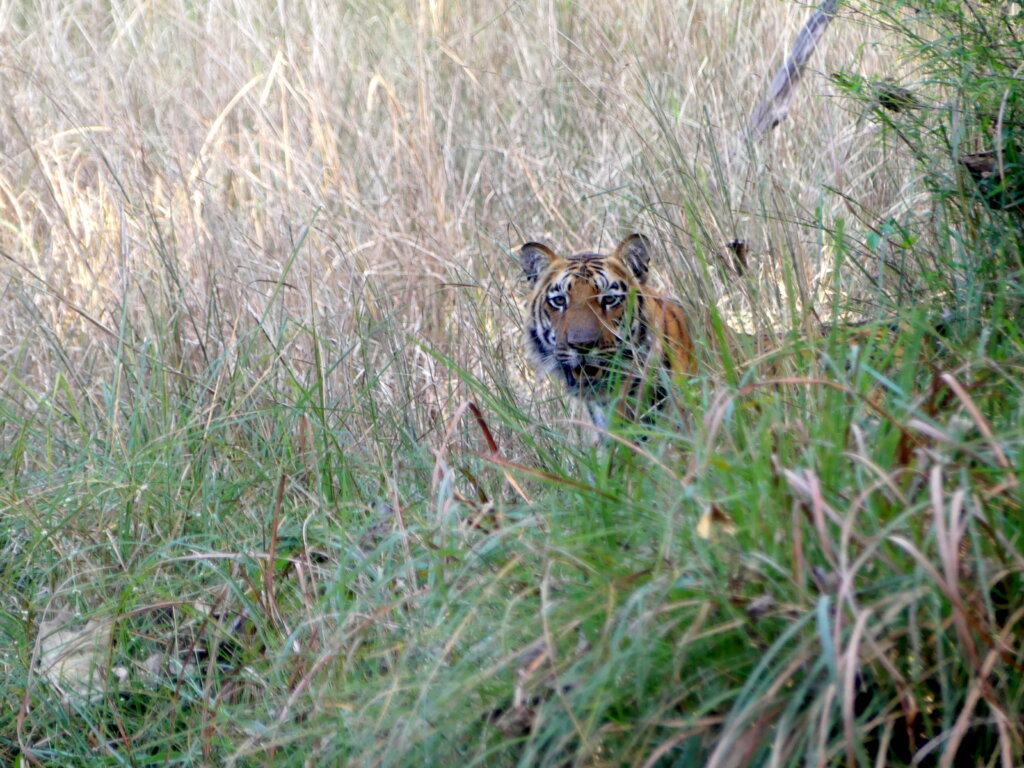 In a few weeks’ time, the two Tiger brothers appeared atop a hill, they had made a Sambar kill and the viewing lasted for a week or so, they disappeared into valleys and reappeared somewhere else one evening, another nallah another week, in the thickets up a ridge showing a stripe or two, we started to learn their stripes of the now sub-adult Tigers. Occasionally their mother would join them on their kill, but otherwise, we have just been seeing the two brothers on and off.

January has been quite a learning for the guests, the naturalists and the two brothers! We haven’t witnessed a kill yet. I have heard one Sambar getting killed in the undergrowth, which they have been feasting on turn by turn. Often one brother waits for the other to finish these days, they give each other their space. In fact I have seen just one at a time for hours on a kill or a spot where it basks, the other brother would be resting at a reasonable distance. Are they at a weaning stage? What could happen next? Would it take a female in-heat to bring out the aggression and territoriality among these, so far, interdependent siblings?

Tree of the Month 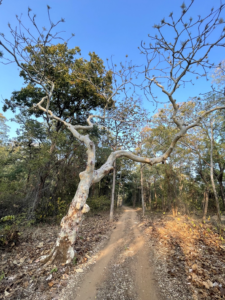 Come winter, the large palmate leaves of the Kullu tree (Sterculia urens) is a show stopper during safaris. Its thin film of pink bark peels to expose the smooth white trunk. For the next few months, Kullu appears like a dead person’s hand out of sandstone cracks reaching out to the sky for emancipation.

Tiny yellow-green flower clusters bloom at the tip of its fingernails appears in January, the wind picks up its musky scent often when we walk past a Kullu tree. The Indian bee (Apis indica) is one of the prime pollinator of the flowers until they turn into five podded red-velvety fruits in February. 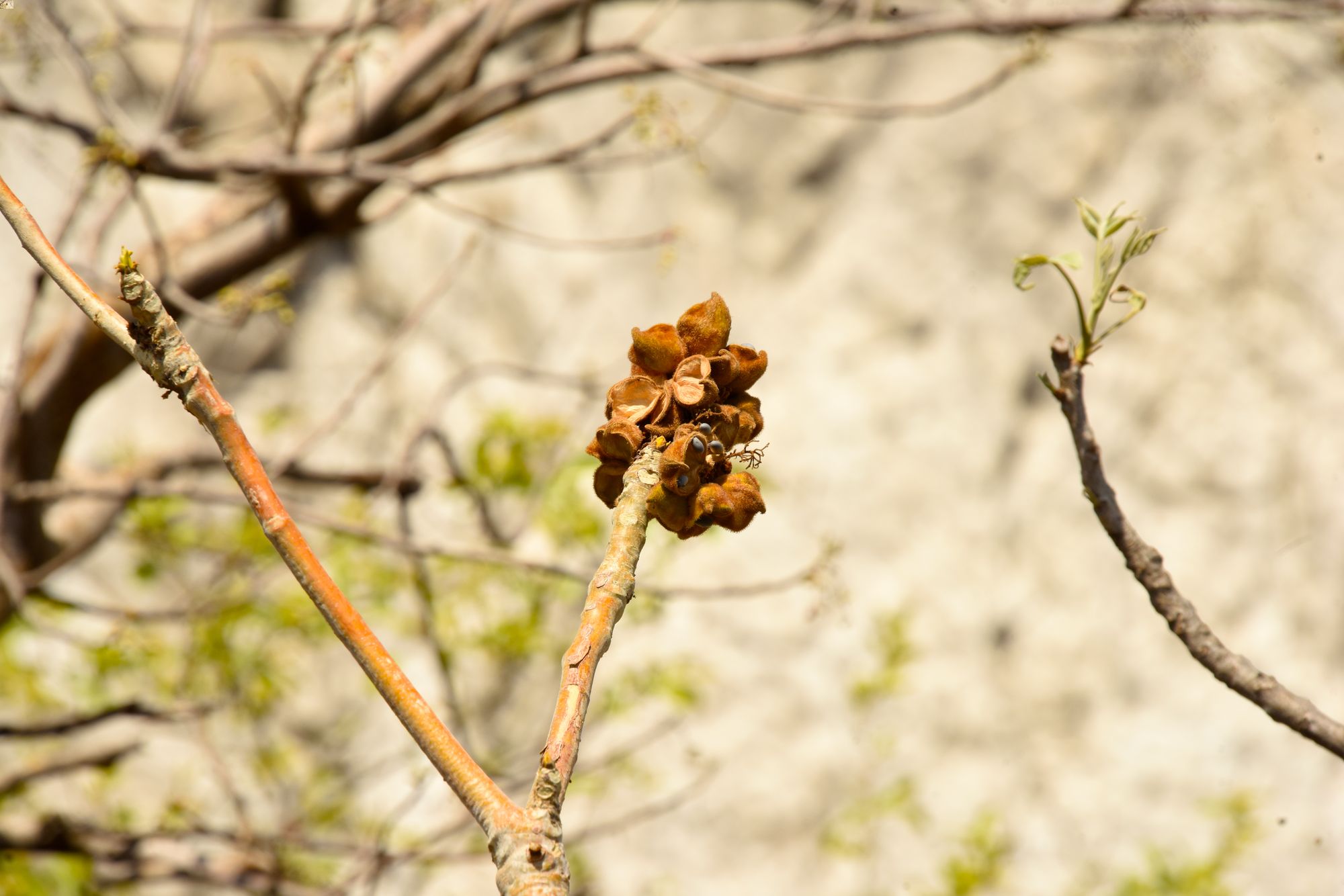 Sighting of the month

Ratels are one of the rarest mammals in Indian forests; we have earlier caught them on trail cameras at Forsyth Lodge. We have often seen them dig for roots in sandy nallahs and signs and tracks often during walks. But they have been elusive.

We were tracking for a Tiger on our way to Churna during safari; it was quite a hot January week then. As I stopped to listen for Langurs giving their distress calls from a distance possibly for the Tiger we were tracking, a rustling in the grass drew our attention! At first I couldn’t believe what I saw!! I shouted out it to be a Ruddy mongoose when I noticed it running away holding just the upturned tail above the grassland. But then we drove to a parallel road, to my disbelief it was my lifer mammal! The Ratel, that to in the midday!! 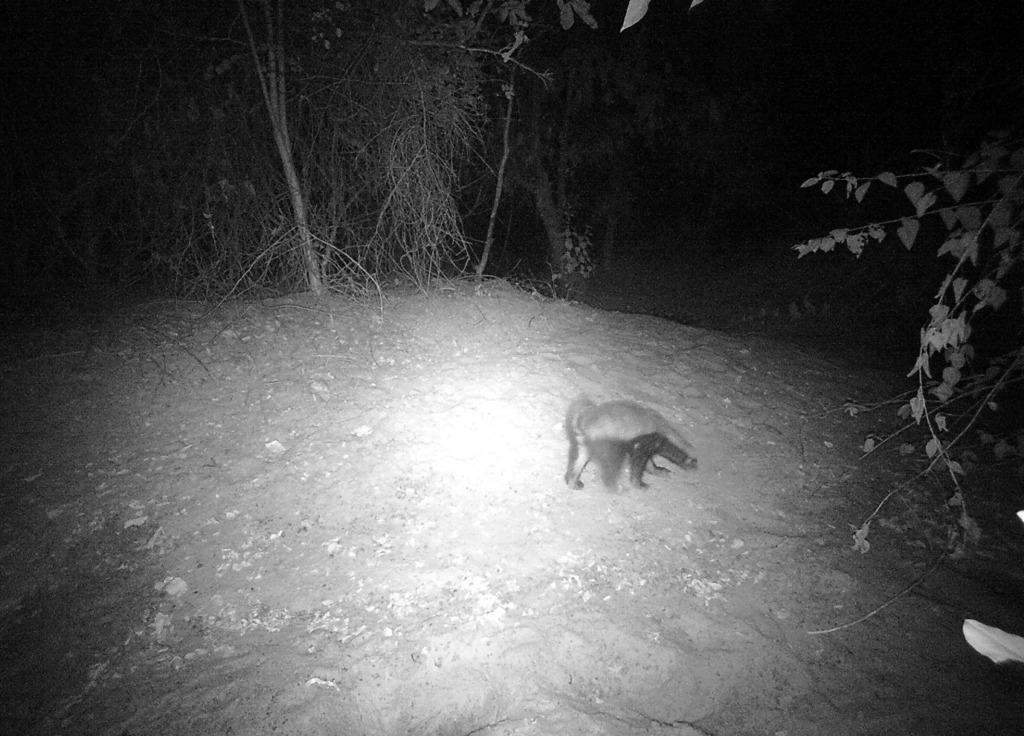 It sniffed the ground through the grassland, without following a specific pugdandee it trotted like a mongoose. The silver on its back blended into the stunted grassland. It went up a mound only then I noticed its short muzzle and black face, strong arms and then the Ratel headed into the lantana thickets and we stood hearing its rustled trot fading away.

Plant of the month 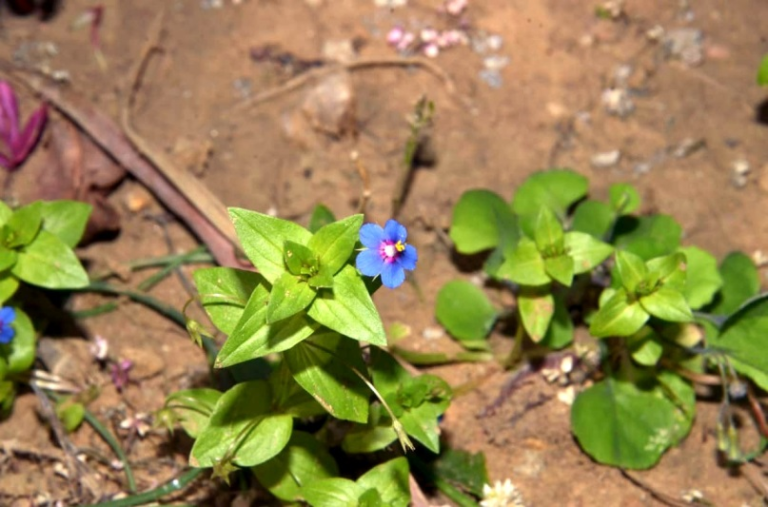 Some bright blue flowers are making a carpet in the sunny winter morning in the open patches. Blue Pimpernel or The Shepard’s Weather Glass or Shepard’s Clock (Lysimachia arvensis var. caerulea) are in bloom. It is a flower of the Primrose family (Primulaceae). As the common name suggests, these flowers indicate the time of the day and the weather as well. The bright blue flowers open in the morning and close off when the sun goes down. They close even during humid or damp weather. Many of the small blue butterflies (Lycaenidae) and flies are seen nectaring on these flowers and helping in pollination although the flowers are capable of self-pollination as well. 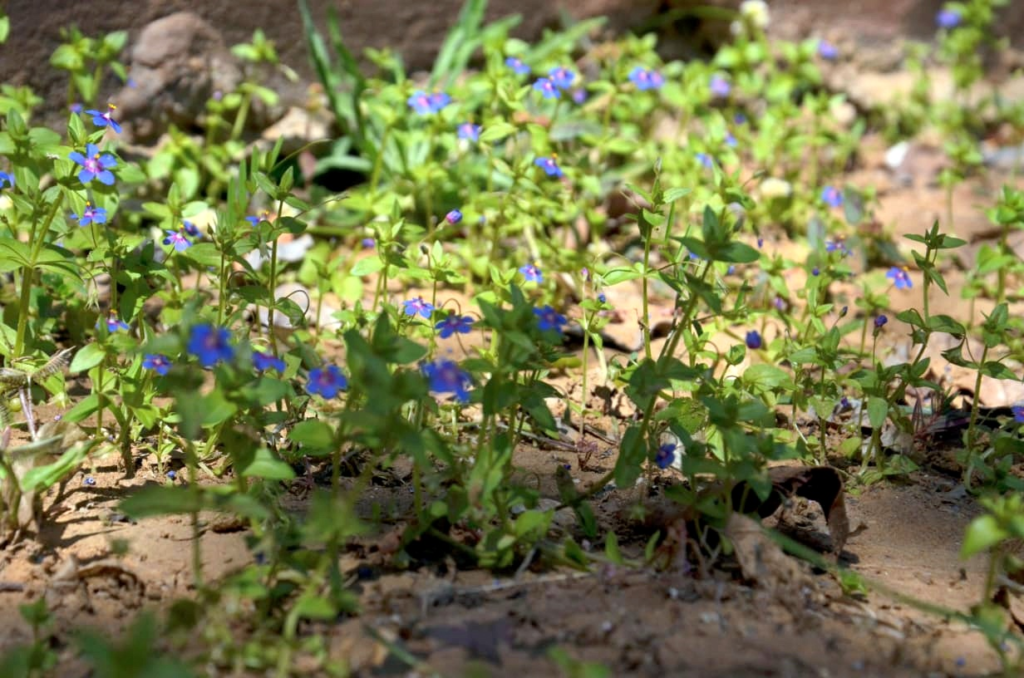 Surprise of the month

Can’t believe it has already been a year since the two love birds at Forsyth tied the knot. So the first anniversary had to be a special one considering they have spent most of it home bound during the pandemic. The plan was to not even let them know that something was getting organised! And they seemed a bit upset about the same, so much so that Vineeth decided to cook Saee her favourite Donne biriyani as the day also happens to be her birthday coinciding with the day India became a republic. 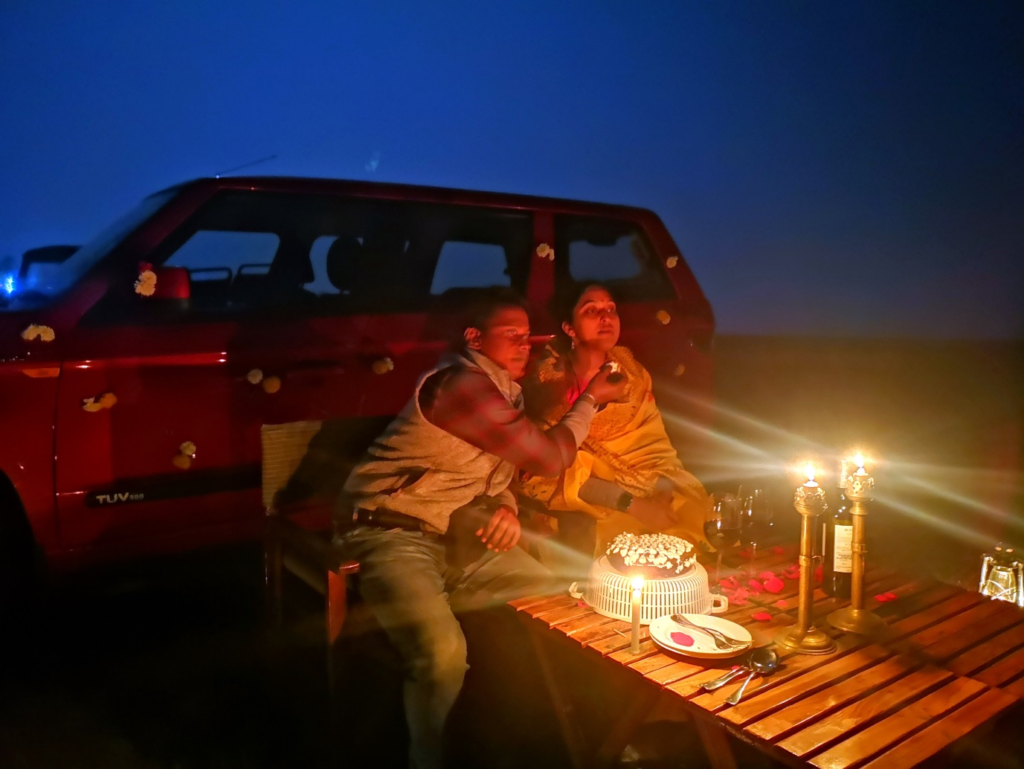 Keeping everything a secret is always a bit difficult from Vineeth so we had to involve the nearby lodge and of course all of us to setup a moonlit surprise on the banks of the Denwa on the pretext of a dinner invite and a snake rescue.

In the end it was just the two of them whispering sweet nothings into each other’s ears, clinking glasses and watching the moon bathed Satpura mountains. And in case they started feeling cold, a vehicle was standing by with a cosy bed.