Flowers are beautiful banner advertisements by many plants. They signal that a plant is mature and it needs sex, a few plants may wait for wind or water to carry their male; pollens, but most have employed insects to do this job.

Quite a few plants have fascinating relationships, luring the flying labourers of love by scent with an offer of some sort and they gently pack a package of pollen onto their bodies to have sex with another flower of the same kind. Some plants are specialists, allowing a particular species into their sexual cabins; fruit. Plants such as figs go to an extent of leasing out these chambers to tiny wasps to even breed.

One of the rare tropical plants is an Indian Birthwort or a Pipervine of Aristolochisaceae family, it is rare due it’s demand for extremely valuable medicinal properties that tend to many common and chronic ailments and most importantly, to ease birthing and also abortions, hence the name; Birthwort. 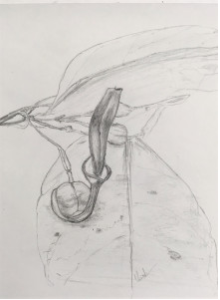 Birthworts in India flower in September in the fag-end of the monsoons. Our team of naturalists had been waiting to see the Birthwort flower and most of us were going to see it for the first time. But the monsoons had us and the vine waiting to bloom. Two days before the clouds unveiled the sun that was hiding for the past one month, the Birthwort decided to mate! About 10 meters high sprawling over an aspiring Indian Ebony tree, the buds shot out as clusters at leaf nodes, a couple of inches long, a stalk held a bulb on which a tiny pipe was about to advertise.

Three dusks later, the Lodge Manager who is one excited flower-lover, put his torch to check the vine and there! The Piper had bloomed to our wonder! Like miniature cobras, the mature flowers alternated their hoods at each node, the flowers had already been capitalized by a Lynx spider. Birthwort flower was tinier than we had imagined, unlike our perspective of images on search engines. This little wonder is a gorgeous flower that would intrigue anyone by its evolved design.

We took several pictures that night and the following morning, and decided to investigate it by slitting one of the flowers that had its hood eaten up by a caterpillar (we had been looking for Rose butterfly eggs and larvae on the plant) When we held this delicate yet carcinogenic flower in our hands, we were awestruck by how the labial had formed a waxy slide into the tube and downwards into the roomy bulb. How this flower even invites someone for sex was beyond us, although on harder inhalation we picked up a faint yet pungent scent. It was definitely not for human adornment. 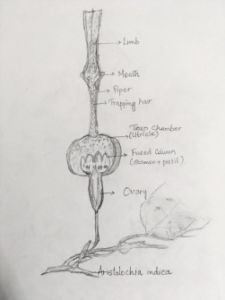 Anyhow, we cut it open to see what was inside the pipe, as we slit it from the hood along its mono-symmetric plane, numerous downward pointing hair which were sticky held a gnat. As we reached the sex cabin the scent was strongest, about 8 tiny flies emerged as though they were waiting for a jailbreak. A couple of them stopped by to thank us but their bad luck, we were curious! We brought them under an inverted fish tank and watched.

It turns out that the pipevine had trapped these tiny insects when the male part of the flower was active. Researchers are studying to find out how these flowers mimic pheromones of tiny insects especially males to draw them for an energy drink. When the flies arrive, the waxy hooded limb lets the flies slip into the pipe and the one-way downward pointing hair along the pipe leads to a cabin. Inside the roomy trap cabin called utricle, these designated postmen are held captive for male part of the flower to pollinate. Only then the pipe dries to ease a few hair, letting their courier out and take their sexual act forward. Interestingly, the male and the female part of the flower are fused called ‘column’, which opens into an ovary that matures after the flies have left with pollens to avoid self-fertilization. 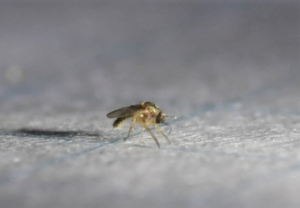 Yet again the Lodge Manager comes to the rescue by lending his macro lens to zoom into our captive insects in the fish tank. We found that there were two kinds of flies, both belonging to a group of flies of the same order as that of mosquitoes. They are scuttle flies and eye flies, tiny gnats that hover around the fungus in our foods or in soil. Only few species of scuttle flies have the right structure to carry the Pipervine’s pollens. And they themselves have an exciting story. Some of these gnats belong to Phoridae that are parasitic on ants!

The intricacy of design in Birthwort, ensures that they successfully transmit their pollen. This evolved design is due to their choice of extremely specific habitat and needing a particular sophistication in pollinators. Well, it begs the question, did the piper evolve first or the pipe? In any case, flowering plants have been guiding evolution for them to travel ever since the early insects appeared.