The beginning of the season has started with two new species added to the checklist of Satpura Tiger Reserve. 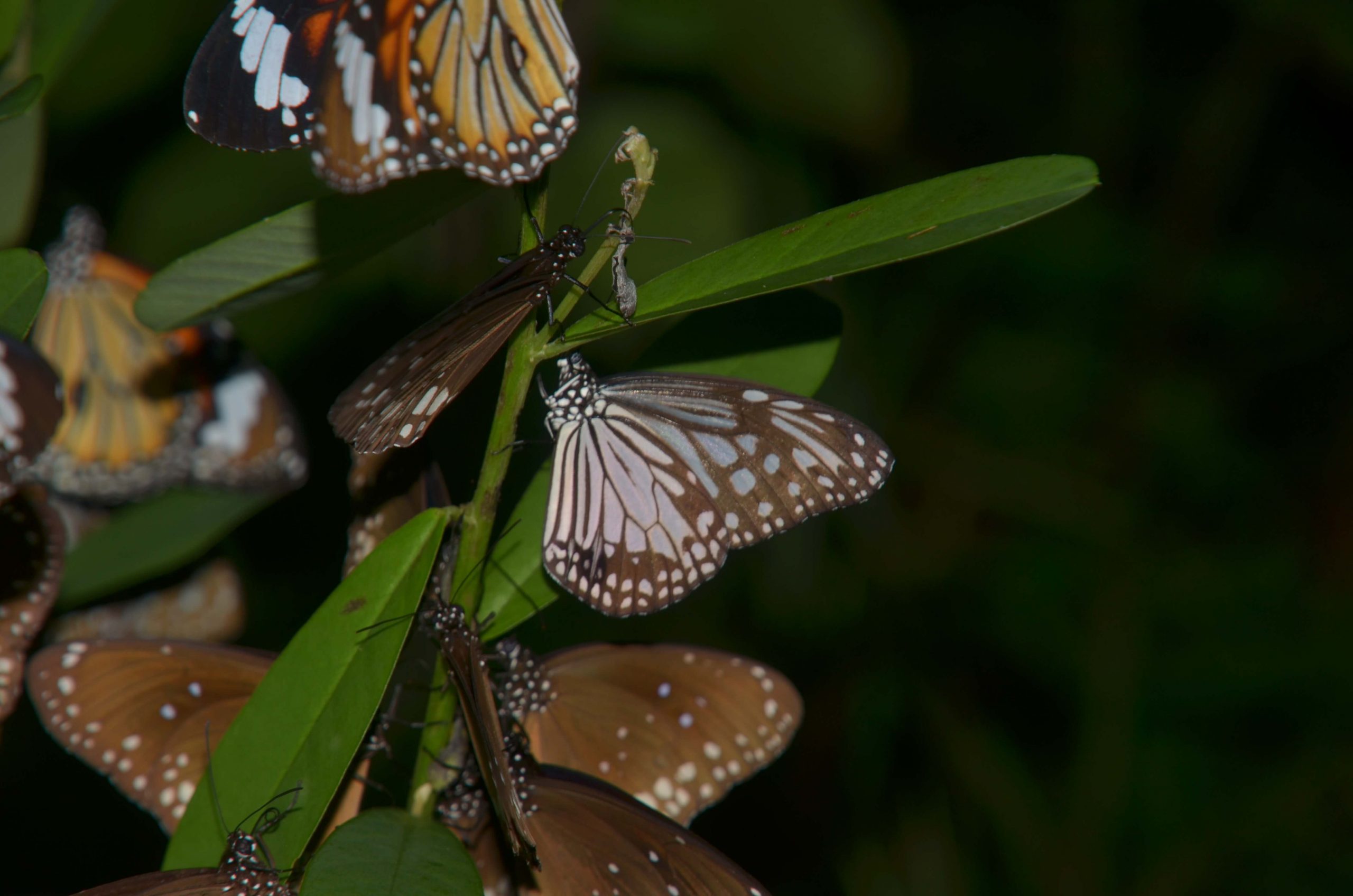 It was an afternoon when my colleague Saee and I went for a walk in the lodge. While crossing in front of cottage 12 inside the lodge, we saw lots of Blue Tiger, Striped Tiger and Common Crow butterflies gathering on a Rattle Pod plant to get the sap by scratching the surface of it. In between all those butterflies, there was one that was a bit different from the others. It looked like a Blue Tiger but not as big or as blue as the Blue Tiger butterfly. It was a bit smaller and cells on the wings were more white than blue and stripes were thinner than Blue Tiger. Fortunately I had my camera handy and it flew after I was able to take some two-three record shots. Later on, I was able to confirm that it’s a Glassy Tiger. When I checked the Butterflies of India website for the distribution, it did not show any records of this butterfly neither from Central India nor from Satpura Tiger Reserve. We did not get this butterfly in our two Butterfly Surveys either! So it was quite exciting news and it encouraged us to explore more in our own landscape. It is so diverse and lots of new flora and fauna are waiting to be discovered. 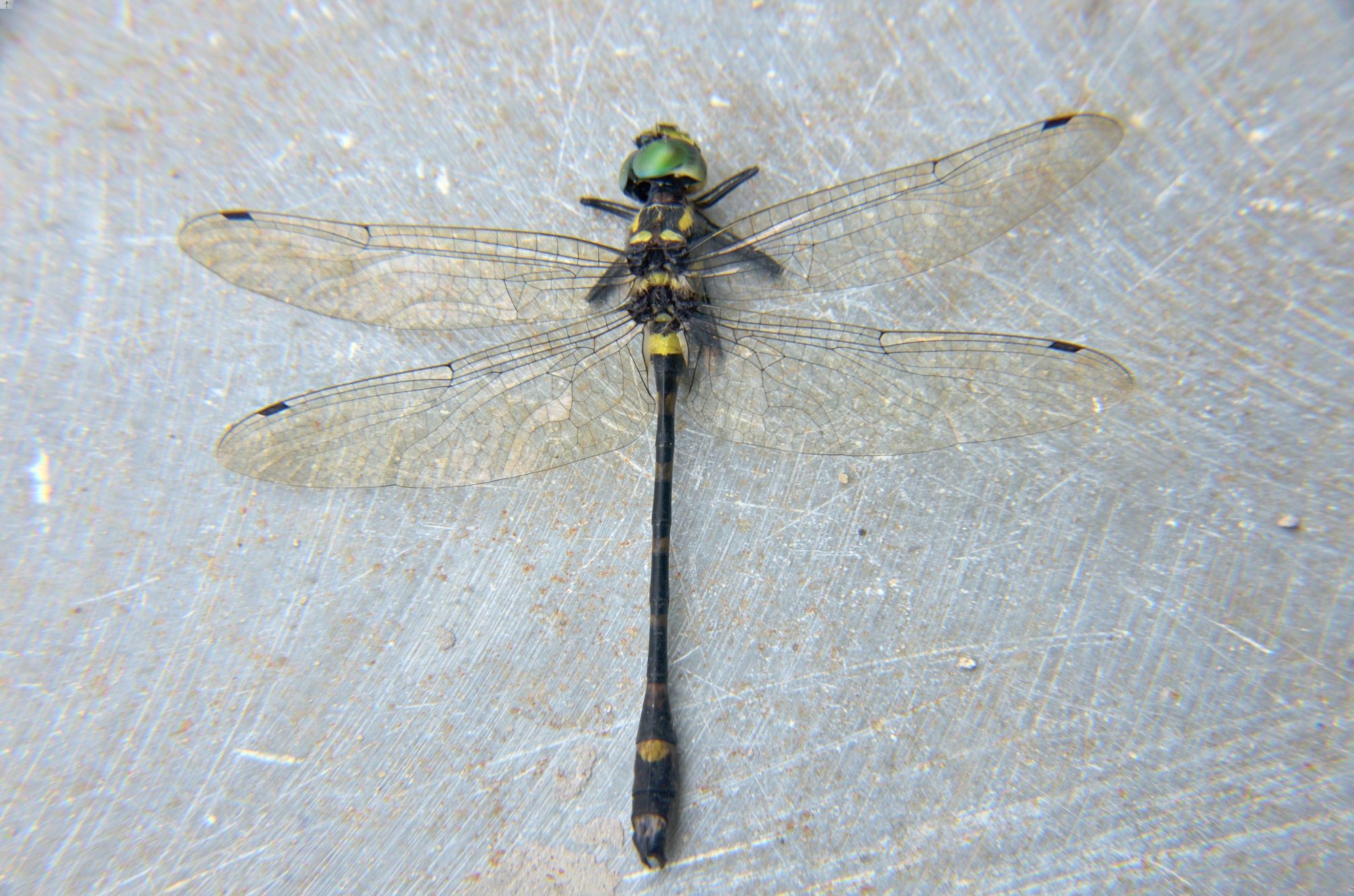 Just after monsoon when the humidity in the air is still prevalent, the insect activity is at its peak. So, exploring our 44 acres of the Lodge always gives us new things to learn. This month, there was double excitement when I got this dead specimen of the dragonfly (Macromia sp.) floating in our swimming pool during one of my evening walks in the lodge. There was no record of this species in Satpura or even in Madhya Pradesh so it was an interesting find. We must watch bigger dragonflies here as well as there are so many beautiful gems hidden in this vast landscape of ours. 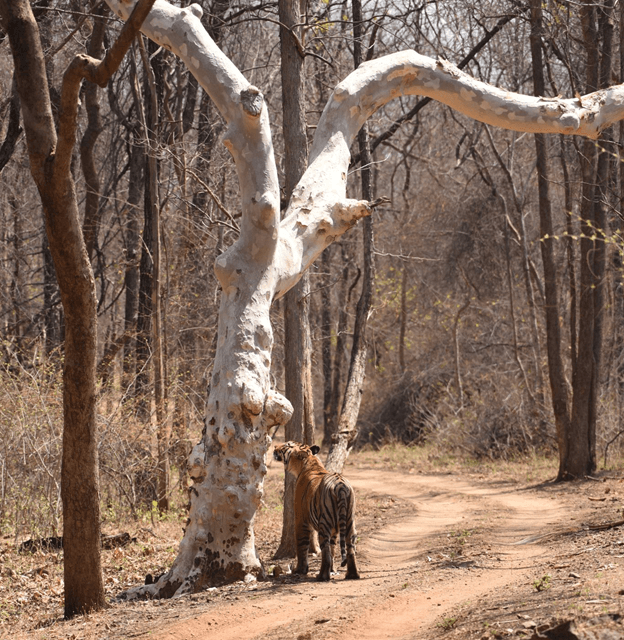 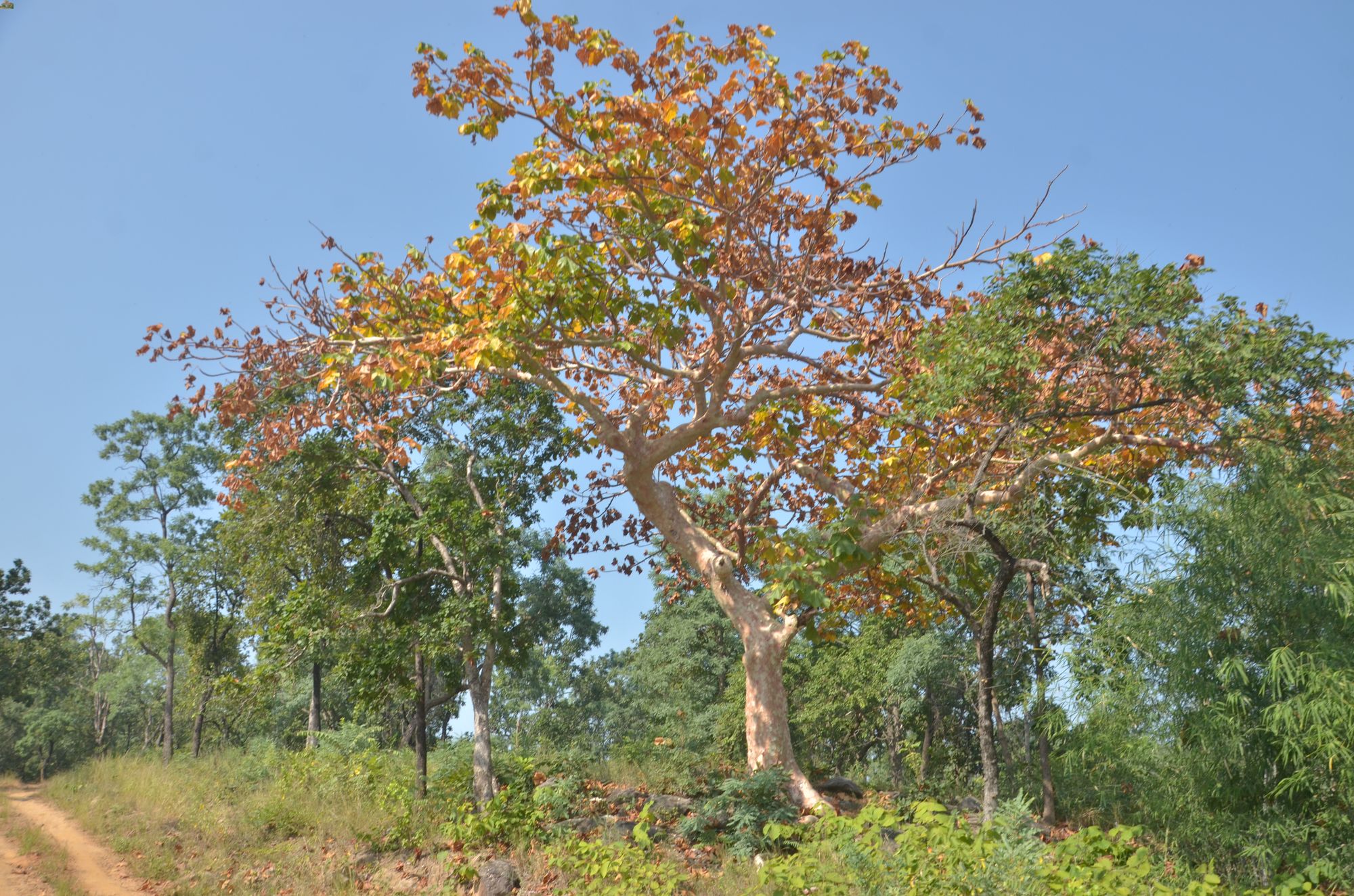 The Ghost Tree or Kullu is one of the first trees I was struck by as it revealed itself to me in the dense forest of Satpura Tiger Reserve. Now the memory of my visit is like a ghost, a faded place I visit repeatedly in my mind.

The rattling of the gypsy down a pebble strewn path indicates you are somewhere remote, somewhere disconnected. The sharp turn right into that quaint, welcoming gate, Dada watchman waits diligently at the post of the lodge, a guardian through the turning seasons of this landscape. And as soon as you approach a clearing, a distinct smell, a unique memory and a specific connection to a place is made. This is Forsyth’s Lodge.

The first time a naturalist pointed out the Kullu to me, I connected with the tree. It was funny how a single tree could have taught me so much about an entire ecosystem of a forest. The changing pinky hues on the bark of the tree reminded me of the varying shades of the forest, from the translucent leaves to the boisterous blue of a sudden Flycatcher swooping past. The Ghost Tree’s chipped off bark reveals thicker flakes which are reminiscent of what lays beyond the thickets of the Satpura range, as you pass it by in a fleeting moment or a long walk through its adventurous terrain. The tree’s ability to have evolved through droughts by remaining flowerless for more than six months of the year tells me of the strength of the forest and its ability to adapt to its ever changing surroundings, most of the times when it is forced to change because it is claimed by someone who it does not belong to.

When a visit seems a far away memory, I concur up the Ghost Tree. I remember it standing crooked as I looked back at it, its image grew smaller as I left its ominous grace. But its memory will forever be with me, the memory of the forest, the memories forever from Forsyth’s Lodge. 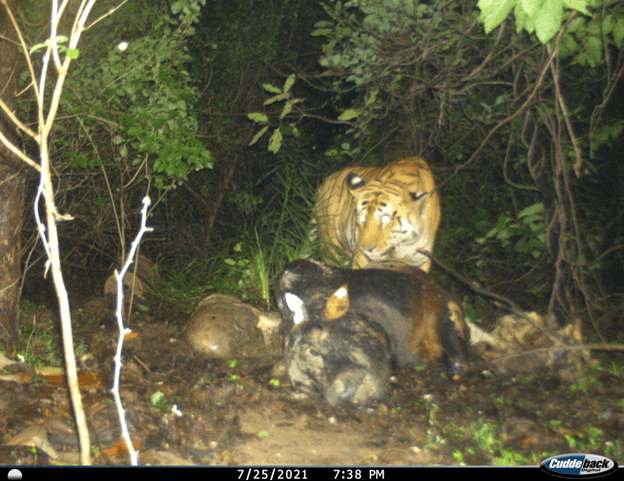 The rains beat down heavy as they do most Satpura monsoons, the lodge was cocooned during the off season month. The lanterns were dimmed completely and the hustle and bustle of our Forsyth Staff was missing when a beautiful visitor crept onto our property with its kill, to find a safe space for sanctuary, and a space to feast. This beautiful visitor boasts stripes of black, cutting through its golden coat with its silent steps. The Tiger was first spotted by our security, Dada as he was on one of his morning walk. As he slowed his steps, he watched the magnificent beast cross him close to the main gate, a visitor he simply couldn’t deny access! Later, our Assistant General Manager, Karthik Hegde rushed back to the lodge from a town nearby. After confirming it was indeed a Tiger that Dada had spotted, Karthik informed the Forest Department who visited the property to identify the Tiger and its kill immediately. They set up a camera trap close to where the kill lay, right behind our main lodge dining area. What was found on the footage the next morning was something to marvel at. Instances like these make us extremely proud and grateful as a wildlife lodge. Proud that we could offer this beautiful animal shelter by not building on more than 4 acres of our 44 acres of wild, fallow land and being a haven to it and several other species of birds, insects and mammals that choose to use it as a passageway or a pitstop. Grateful that they chose us.

Although our striped friend has left us for a while, we do hope that he and all creatures, big and small will return the next off-season to use the lodge as their sanctuary once again and always.